The Fear and The Gap Is No More With Dental Implants

This is the story of a well-known man, fearless in most respects, who was afraid of the dentist and dental implants. Even though his fears had resulted in neglect and serious damage to his teeth, modern dentistry and a talented dental team were able to restore his smile to health. If you share this fear, his story may inspire you to take action.

We’re talking about WilliamPerry, former defensive lineman and fullback for the Chicago Bears. Here is a man who could fearlessly face a football squad — but not a visit to the dentist. Nicknamed “The Refrigerator” for his 380-pound massive frame, Perry played for ten years in the NFL before retiring in 1994. Since retiring he founded and operated a construction company in South Carolina in addition to making celebrity appearances.

With his celebrity in mind, a team composed of a talented restorative dentist, implant surgeon, and lab technician agreed to give “The Fridge” a makeover. After discussing modern technology and virtually pain-free dentistry with him, they managed to overcome Perry’s fears. “I had been in constant pain for many years and I neglected myself, not having had any dental care for over 20 years, not even emergency care. Unfortunately, as I grew older my teeth started to get loose,”Perry told an interviewer. He had lost many teeth and became known for his gap-toothed smile.

Perry had severe gum disease and many of his remaining teeth were loose. In the past his only option would have been a full set of dentures. But his new dental team was able to place dental implants (permanent tooth replacements) supporting fixed bridges.In most cases dental bridges are attached to healthy teeth, but in Perry’s case the implants served as anchors for the bridges. They also stabilized his jawbone, which would otherwise “resorb” or melt away after his teeth were lost. This is important because it helps preserve the contours of his face.

After careful planning “TheFridge” had eight dental implants placed in his upper jaw and seven in his lower. The final bridgework was completed four months later. It turned out that even though the gap between his teeth had become his trademark, “the Fridge”never really liked it. He was thrilled with his new smile.

Even if you have some fears, don’t hesitate to follow Perry’s example and make an appointment with us for a consultation about dental implants, smile makeovers, or bridgework. For more information about William “The Refrigerator” Perry, see the Dear Doctor magazine article “HowImmediate Implants Saved ‘Refrigerator’ Perry’s Smile.” 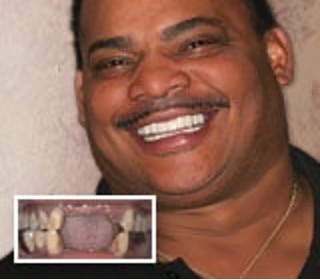