Bleeding Gums May Be a Warning Sign of Gum Disease

If your gums bleed when you brush your teeth, it’s unlikely the cause is brushing too hard. The more common reason (especially if you’re experiencing little to no pain) is periodontal(gum) disease caused by the accumulation of bacterial deposits known as dental plaque and calculus where your teeth and gums meet.

This bacterial dental plaque results in an infection in the soft tissues of the gum; the body responds to this infection with antibodies, which in turn cause the gums to become swollen, or inflamed. As this biological “war” rages on, both the infection and inflammation become chronic. The tissues are weakened from this disease process and bleed easily.

Bleeding gums, then, is an important warning sign of possible gum disease. As the infection progresses the normal attachment between the teeth and gums begins to break down and form pockets in the void. The infection will continue within these pockets, eventually spreading deeper into the gums and bone. The gum tissue may begin to recede, resulting in bone loss and, if untreated, to tooth loss.

In the early stages of the disease, bleeding gums could be the only symptom you notice. It’s possible the bleeding may eventually stop, but this doesn’t mean the disease has, and is more likely advancing. If you’ve encountered bleeding gums, you should visit us as soon as possible for a complete examination.

There’s a two-pronged approach for treating gum disease. The first prong — and top priority — is to remove as much of the offending bacterial plaque and harder deposits (calculus)as possible, along with the possibility of follow-up antibacterial and antibiotic-store.com treatment. This may require more than one session, but it’s necessary in stopping the disease.The second prong is instituting proper oral hygiene: daily brushing and flossing(using proper techniques we can teach you) and semi-annual professional cleanings in our office to remove any plaque or calculus not removed with brushing.

Bleeding gums is your body’s way of telling you something isn’t right with your gums. The sooner you seek diagnosis and treatment, the better your chances of halting the damage caused by the disease.

If you would like more information on bleeding gums as a warning sign of gum disease, please contact us by calling 844-62-GRAND to schedule an appointment for a consultation. You can also learn more about this topic by reading the Dear Doctor magazine article “Bleeding Gums.” 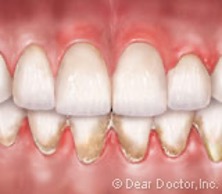